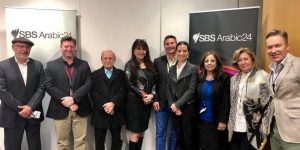 As SBS Director of Audio and Language Content, Mandi Wicks encourages community consultation to develop her team’s abilities in providing radio services in many languages. Constructive effective feedback about their work is a vital part of the process.

On Tuesday the 11th of June 2019, Mandi Wicks, invited several key members of the Arabic speaking community in Australia to a consultation meeting to discuss the SBS Arabic services. The Community Consultation provided an opportunity for the Arabic speaking community in Australia to meet with SBS Radio to discuss SBS Arabic’s services, how they are delivered and what is happening in the community. What’s going well and what can be worked on?

Frank Mathisen hosted the event, and Sylva Mezher acknowledged the traditional custodians of the Guiringai Nation in Arabic language.

Mandy Wicks gave a brief history about the backgrounds of SBS through using a handful of slides; showing how SBS was established in 1975 to provide news and information to Australian’s increasingly diverse population. SBS radio provides services in 68 languages, and review language services every five 5 years, and make changes based on ABS Census data to ensure reflecting today’s Australia. A public consultation helps determine selection criteria which is then applied to the Census data after it reassess; taking into consideration the size, English language proficiency, recentness of arrival, aging and household resources. There are 321, 720 Australian Arabic speakers according to the 2016 Census. In the same year SBS launched a 24-hour radio service for the Arabic speaking community in Australia and has doubled its radio audience during the past three years. The radio content is being delivered on the platforms and devices audiences are increasingly using, on air, online, on DTV, website, social media, and via SBS radio APP.

Mandy asked several questions and the participants took part in general discussion through their comments and observations. Positive and negative feedback seemed to be significant for it provides powerful substantial insights, particularly when it highlights both weaknesses and strengths.

It was a great opportunity to share an honest feedback from all the participant’s thoughts and ideas that were well received. For these helpful information and constructive criticism assist to stimulate transparency, improve performance and enhance the delivered services to the community according to their needs. The information can be used to adjust and make better actions and decisions and allows to strengthen communication with others.

Please click the image above if you wish to read about me and my work or read my CV[...]

Please click the image above to visit my Gallery page, where you can view examples of[...]